Bit by bit, humans make models of the world to try and make sense of it. This is as true for disability as it is for astrophysics or evolutionary biology. In my contribution to Stammering Pride and Prejudice, I outlined just four ways that disability has been modeled: “a cosmic sign in the religious model, a biological pathology in the medical model, a social oppression in the social model, [and] a political relation in the aptly named political/relational model” (2019, 12). The way that we think about disability matters because – to indulge in medical language – how we diagnose a problem will shape its treatment. If stammering is nothing but pathology, a sad deviation from a normal human life, then to treat the problem is to fix each individual stammerer. On the other hand, if stammering is a complex interaction of multiple forces, the “problem” must be redefined and located elsewhere: in, for example, oppressive stereotypes, pressures of time, and inhospitable listening practices. In this post, I approach stammering from a different angle: focusing not on how we model disability but how we model communication. What is communication? What is it for? What does it do? How does it go “wrong”? Here again our models matter. The communication theorist Lisbeth Lipardi (2014, pp. 10-11) describes three models of communication that have jostled together across history: the transmission model, the semiotic model, and the ritual model. In the transmission model, communication is the act of delivering a message from sender to receiver. In the semiotic model, signs symbolize or represent the world. And in the model of ritual, communication is the act of sharing – of communing with others – as a way to build and maintain social worlds. Lipardi makes it clear that each model is “correct” insofar as it describes part of the experience of human communication: sometimes we are just transmitting a message, sometimes we do represent the world with symbolic tools, and sometimes we do share gossip for social cohesion. Each mode is always inflected with the others.

Yet while all three models jostle in play, scholars argue that since the nineteenth century, the transmission model has come to dominate our common-sense ideas of communication. What are the consequences of this takeover for stammering?

Before turning to and critiquing the transmission model, allow me one last word about models themselves. Models are always an abstraction from the universe; a 1:1 correspondence with the universe is impossible. Whether we are talking about “genes” or “gender” or “pathology,” these are abstractions that we must recognize as abstractions for them to remain useful tools and not become harmful. Models are thus built with metaphors, and these metaphors are most helpful when they highlight the abstraction and most dangerous when they camouflage it. Practitioners of models that become dominant and entrenched over time (like the medical model of stammering or the transmission model of communication) tend to take their models too seriously such that metaphors cannot be recognized as such, let alone entertained differently, let alone played with. 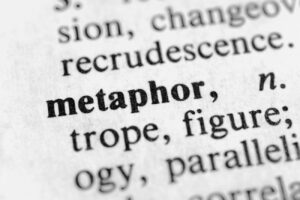 In this way, speech experts have spilled tremendous amounts of ink to produce a lexicon around stammering that cinches its metaphors up to standards of medical-scientific practice. While this is all nice and fine, what if we started with different metaphors?

Accidents are funny things. By definition they are unexpected, and often unfortunate, events that we also expect to happen. Vehicle collisions are expected outcomes of goal-directed processes (especially when carried out at speed) such that the accident is always pre-built into a technology. The theorist Paul Virilio writes that “[t]o invent the sailing ship or steamer is to invent the shipwreck. To invent the train is to invent the rail accident of derailment. To invent the family automobile is to produce the pile-up on the highway” (2007, p. 10; emphasis in original). Similarly, I would suggest that to invent fluent communication (the expectation of uninterrupted and effortless flow of speech) is to invent a host of communication accidents.

It is not a stretch to think about dysfluency using the framework of transmission and accidents. In the nineteenth century, the term “communication” described both the movement of material things (commodities or people) as well as the movement of immaterial ideas (information). This was the age of the railroad, telegraph, and telephone, which accelerated things and ideas across entire continents. But, as the communication theorist James Carey argues, the transmission model is old, tracing back to the rule of ancient empires. “The center of this idea of communication is the transmission of signals or messages for the purpose of control. It is a view of communication from one of the most ancient of human dreams: the desire to increase the speed and effect of messages as they travel in space” (2009, p. 12). Within a model that defines the success of communication in terms of speed and accuracy, stammerers are little more than unreliable messengers, accidents-in-waiting.

I venture to guess that the framework of accidents also resonates with the experience of many stammerers. In general, people (taking their cue from the transmission model) like to think of communication as an intentional and goal directed process: the successful delivery of the message that one intends to send. But for stammerers trying to navigate a world that leaves little space nor time for dysfluent voices, communication can often feel more like driving on ice: teetering in and out of control, sensing an oncoming word accident, panic, swerving to minimize damage while moving in the general intended direction, stares from bystanders in the aftermath. Here we might imagine a wide array of dysfluent accidents (cited from St. Pierre, forthcoming 2022):

This is not a complete list, nor, as I will explain below, are these descriptions the end of the story. But one reason considering dysfluency in terms of accidents – or, “communication breakdowns” – is helpful is that it encourages a more rounded picture of responsibility. When any of the accidents listed above occurs, the stammerer is most likely held responsible for the breakdown in meaning-making. Yet accidents are never this simple. It is legal convenience rather than sound philosophy that holds drivers responsible for traffic collisions while minimizing the combustion of factors like lackluster design and maintenance of infrastructure, transportation by-laws, environmental conditions, the effects of speed on the body, etc.

Similarly, insofar as the transfer of meaning can be derailed at any point, the transmission model produces frail practices of communication that are prone to breakdown – yet pathology makes an easy scapegoat. This again makes the design of the system (along with a host of other factors) an active participant in any breakdown.

I believe the language of accidents is useful for dysfluency studies, if the language is not welded to a technical account where accidents and the disruptions they create are by definition harmful. The transmission model of communication, with its focus on control via speed and accuracy, intentionally tries to minimize the possibility of accidents. While the goal of accident-free communication makes sense at certain levels (see my monograph Cheap Talk on this point), a world without accidents in the fuller sense is a world without unexpectedness, without chance, and without surprise.

Attending to dysfluent accidents through a different mode of communication can allow for more interesting possibilities. As I explain elsewhere:

“For Carey (2009), the oldest and most enduring model of communication is that of ritual, a model that plucks the etymological resonance between the terms “communication,” “commonness,” and “communion” (p. 15). . . . Carey famously suggests that communication is here akin to attending religious mass, where the point is not to transmit information but to draw people together in communion – to produce and maintain a shared view of the world through repeated practices” (St. Pierre, forthcoming 2022).

In the mode of ritual, dysfluent accidents are transformed from a necessarily destructive force to a possibly generative one:

“Carol Padden (2015) takes up Carey’s (2009) model to account for the rich complexity by which disabled people communicate. Ritual, she argues, emphasizes “performance, activity, and the materiality of communication itself. In this framework, meaning is not so much the definition of a word or sentence but instead is constructed in situ, in social and cultural activity” (p. 44). Unlike sending a message, meaning gets enacted in the very midst of unruly bodies that excrete “all levels of expression, from the minute details of discourse – from pitch, emphasis, gesture, head tilts, and eye gaze” (p. 44). Twitching bodies, stuttering tongues, signing fingers, and slurred lips (and all the affect they carry along) are no longer distracting “accidentals,” but the very materiality of communion” (St. Pierre, forthcoming 2022).

While a remetaphorization of stammering via the accident is useful, especially as a way to side-step a history of pathologizing discourse, what would be even more helpful is a dictionary of generative dysfluent accidents. Take, for example, one of the previously listed accidents – “the stall”:

“Composer and writer JJJJJerome Ellis explains that his general response to a blocked word is to look upwards and freeze. “Part of it feels like my body goes into a kind of supplication or prayer almost. I have a friend who once referred to it as ‘watching me ask for the word’” (Cole, 2020, n.p.). In the mode of transmission, meaning would flee this scene, yet in the mode of ritual, the frozen supplication is a link to the body’s ancient relation to meaning and language, one in which we do not command but must together wait in the unexpected. Humans communicate by accident” (St. Pierre, forthcoming 2022).

For those who take their (medical) models too seriously, JJJJJerome’s prayerful experience would likely be read as a quaint metaphor, perhaps an interesting analogy from which to glean data. But I am here reminded by G.K. Chesterton that “[w]ithout education, we are in a horrible and deadly danger of taking educated people seriously” (1986, p. 71). When we understand what models and metaphors can and cannot do, it opens new avenues of meaning for stammering, new chances for happy accidents.

Joshua St. Pierre is Canada Research Chair (Tier 2) in Critical Disability Studies and Assistant Professor of Political Science at the University of Alberta. Working at the intersection of critical disability studies, contemporary political theory, and feminist theory, his research focuses on the interplay of communication and disability within information societies. His first monograph, Cheap Talk: Disability and the Politics of Communication, releases in May 2022. 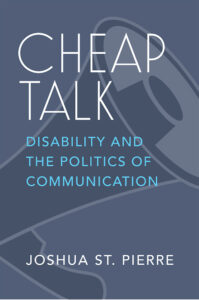