At first sight, eloquence and stuttering are a mismatch: Eloquence is the art of public speaking; stuttering is typically seen as a pathology that impedes people from speaking. As fluency is deemed the main component of a speech, everything that goes against it is considered a hindrance to the art of being eloquent.

However, what if being eloquent is not all about fluency? Indeed, a person’s emotions, gestures, silences, speech structure, and ideas impact as much, if not more, their ability as an orator. These are skills that do not depend on someone’s fluency. Indeed, perhaps, the experience of lacking fluency encourages their development in compensation – the concept of brain neuroplasticity may suggest so.

We, Juliette and Mounah, both grew up with a stutter. Over time, we learned to follow our own rules instead of those that society seemed to impose upon us. We took on as many speech challenges as we could. By doing so, we realized that stuttering didn’t have to be a barrier in our lives. Stuttering makes us unique and always pushes us to give our best.

We met a year and a half ago at the Association Parole Bégaiement (APB) (French Stuttering Association) bi-annual conference. After a dozen Starbucks’ meetings, we decided, with the help of APB, to share our vision with as many people as possible. We embarked on a new challenge: creating the first-ever speech contest for people who stammer in France.

Let us be honest, we were navigating an unknown sea: we did not know that much about speech contests, nor did we know if people would take a contest for people who stammer seriously. Nevertheless, we persevered. At a bar, we met an eloquence specialist, Guillaume Prigent. He helped us to structure the trainings and the contest rounds and gave us access to some of the best eloquence teachers in France (including himself). Things finally started to gain momentum when Université Paris Dauphine agreed to host all six weeks of training as well as the competition rounds. We needed one more thing: people who stammer to register! Thankfully, APB, some wonderful speech therapists and the French online stuttering community restlessly promoted our project and finally everything came together! 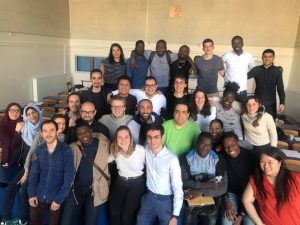 For six weeks, 30 people who stammer from different social and educational backgrounds (ranging from not having the baccalaureate to Ph.D. level) and aged between 16 to 60 lived an adventure of a lifetime.

The first three Saturdays were composed of masterclasses given by eloquence specialists as well as speech therapists. The participants learned how to build an argument, as well as how to use body language and voice variations to express a message more effectively. During the weekdays, we held small group workshops to help participants fine-tune their newly learned skills. Gradually, the participants formed a wholesome community. They were all facing their biggest fear together and all the candidates helped and supported each other. After three weeks of intense training, the results were beyond our expectations.

The competition rounds started the following Saturday, when participants delivered a speech in front of a jury panel composed of speech therapists, people who stammer and eloquence specialists. We started with a mock round, to put everybody at ease. Then, we had three competition rounds. Each candidate had to hold a position and all were given constructive and positive feedback. 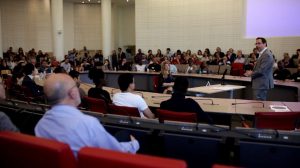 For the first round, participants chose the topic. For the semi-final and the final, the topic was chosen for each candidate as the goal was to push them out of their comfort zone to see what they could do in a challenging speaking situation. As the competition rounds progressed, we kept the workshops going too. It helped everybody to prepare and be ready, whilst also enjoying themselves. Rapidly, D-day arrived: the final, in front of 200 people as well as French TV cameras in NATO’s old meeting room. This was the real test: would eloquence professionals and non-stuttering specialists be convinced? We had planned as much as we could, the finalists had trained hard, it was now up to the candidates to face the challenge they had been working towards for more than a month.

The eloquence specialists were amazed; one of them even said: “I have been a jury for 10 years to thousands of eloquence contests, but this is one of the most interesting and genuine contests I have ever seen. This contest is an honor for eloquence, it represents the essence of eloquence: the art of effectively communicating a message”.

The public took it as a life lesson: you should dare to live the life you want. Media-wise, the event had such an impact that we were involved in six segments on stuttering on national media in two months. Last but not least, it changed the lives of many of the candidates, as well as ours. Stuttering is a part of ourselves we cannot change. However, we can change the way we live our life with stuttering. We believed it before, now we are convinced. 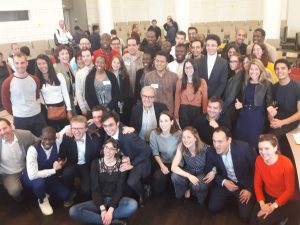 At first, this project seemed impossible, but we did it!. As we believe that it can change the life of many other people who stammer around the world, we are currently creating a guide to set up this project in other countries. If you are interested, you can contact us at eloquencebegaiement@begaiement.org