In 2019 I was surprised to receive an invitation to address the annual  pre-conference of the National Stuttering Association of America (NSA). To this day, when it comes to neurodivergent conditions, people tend to think of Autism, ADHD, the Dys “sisters”, Lexia, Praxia, and Calculia, and Tourette Syndrome. Thus, till then, I hadn’t considered Stuttering to fit within the ambit of the ND movement, not least because I hadn’t thought about Stuttering at all. I couldn’t even remember ever having met a stutterer. I later discovered that an estimated 1% of the population (of the US and probably elsewhere) are Stutterers! The reason for this anomaly became obvious soon enough… Stutterers have been forced to mask their natural speech because of normative prejudice.

Thus I nearly declined the invitation but, luckily, Prof Vivian Sisskin, the organiser, had sent me three readings:

They blew my mind!

It soon became clear that the Stuttering Movement has evolved along the same lines as the ND Movement. Their community too has a medically labelled condition which is described in purely negative terms, which becomes a cause of shame and of masking. And Stutterers too are developing Stuttering Pride and redefining themselves in terms of what they and the world gain from their condition.

NB: I may refer to the authors as “Chris” and “Josh” since I had the good fortune to meet them personally, and I want to keep this informal. I hope they won’t mind.

The Constantino piece on the Neurodiversity movement was outstanding, one of the best I have read. Academic, comprehensively researched,  and importantly,  in plain enough language for a broader audience.

Chris’s earlier piece,  “Stuttering Gain”, an exploration of what Stutterers were discovering about the  gain both they and world made from their mode of speech opened my mind. It speaks to me personally, as someone who has difficulty with making small-talk, and find listening to it tedious. Chris reframed this “difficulty” thus:

“What strikes me about our stuttering is its ability to disrupt the expected flow of a conversation. Much of human communication is routine and automatic. People speak without actually saying anything, they engage in a ritualized exchange of mundane phrases in a rehearsed rhythm that requires little thought. Speaking is used to keep others at a distance rather than to bring us closer together. Heuristic phrases and trite clichés turn potentially new and exciting situations into familiar and rehearsed routines. We would rather act out a routine, “Hi, how are you,” than actually speak to someone.” (Constantino: Stuttering Gain, 2016)

And here is the Gain:

“… stuttering shatters this ritual. The irregular rhythms of our speech allow for open and honest communication unburdened by meaningless, stereotyped phrases. […] The unexpectedness of stuttering forces both listener and speaker into a space of trust and vulnerability. They must both give up control of the situation. […] Just by saying hello, we deeply connect with another person.” (Constantino: Stuttering Gain 2016)

It’s a beautiful written essay that needs to be read in full, so it is with difficulty and regret that I pull out just a few points for brevity. Josh builds on the medical and social model debates, reminds us that not all the responsibility in a dialogue is with the speaker but with the listener as well. He examines how stuttering is constructed as a disability by cultural i.e. capitalist norms of efficiency, pace, and self-mastery, and how the liminality of the stutterer i.e. the indeterminacy of whether stutterers are disabled or not, suggest a moral failure of self-mastery.

To flesh these ideas out in my own words, and I hope I do not misrepresent his work,

My initial observation was: “At Last!” – a sociological perspective! A nice change for me from the mainstream psychological, individualist, work-worshipping perspective of a lot of the discourse around Neurodiversity. A no-holds-barred sociological view of psychology might be:

Sociologists are about analysing the broader social context of an issue, or as one of the “fathers” of modern sociology C. Wright Mills tasks us, we must always seek the public issue behind a “personal problem”. Nowadays we would be talking about the public issues as “intersectional dis/advantage”.  On the other hand, Psychology focuses on fixing the personal problem and integrating the person back into society, and often being the Gatekeepers of “normality”.  (My take)

But I’m not a sociology fundamentalist. I see a psychologist regularly.

Despite being considered a social constructionist, in my original thesis, republished here,  I was critical of social model fundamentalism, calling its rejection of biology “almost Creationist”. I prefer the application of the best of both social and medical models.  Besides, psychologists are moving closer to a sociological, i.e. intersectionalist, understanding.

For me the point is iterative: individual change and social change go hand over hand. You’ve got to work on both.

So let me mention the C-word again, as Josh does. We live in a capitalist culture which is both positive and negative, both immensely creative and exploitative . “Time is Money”: Time is speeded up, humans are speeded up. I diagnose Societal Attention Deficit Hyperactivity Disorder (SADHD) . In our C-culture, the feeling is endemic, that we don’t get enough attention, don’t get enough time to express all we have learned from the avalanche of new information that pours down on us daily with the morning news.  Everyone is gasping for Airtime. And Stutterers and people slow of speech, are just barged over in the stampede. Being slow of speech myself, though not a stutterer,  I can vouch for that.

Josh’s piece brought me back to the communication issue, “Speech is constructed by both Speaker and Listener”. He reminds us that listeners also have a responsibility. What??? Is it possible that not all the responsibility in maintaining a dialogue is on the speaker??? I must tell that to certain people who are always barging over me, that it’s not just me, it’s also them :-)! Josh writes:

“the common assumption that hearing is passive and speaking is active, i.e. a speaker projects words and a hearer simply and neutrally absorbs them. The passivity of the senses, particularly the passivity of hearing, has a long history in Western philosophy.” (Joshua St. Pierre 2012)

On liminality interpreted as moral failure

Liminality is the state of being situated on a border, being a little bit on both sides, which can induce an anxiety-provoking feeling of indeterminacy or unclassifiability in ourselves and others. Josh writes:

The concept of  liminality is “underlined by the nature of the stutterer, who is neither clearly abled nor disabled”. This liminality can help explain the unclear and conflicting expectations forced upon stutterers, who, unlike many other disabled people, are often expected to perform on the same terms as the able-bodied. Disfluency can thus be interpreted as a distinctly moral failure: the failure of a stutterer’s will and self-discipline, which undercuts and threatens capitalistic virtues.  (Ibid)

Neurodivergent people who are invisible because they don’t ride in wheel-chairs or show any inclination to train for the Paralympics,  are easily seen as “not trying hard enough”. As Josh  writes, in an analogy with the treatment of Fat people:

“the  endorsement of a Protestant ethic ideology leads one to view [fat] peoples as wilful violators of traditional American values such as moral character, hard work, and self-discipline.” Fat people must be lazy and indulgent since they could control their bodies if they really wanted to.” (Ibid)

The notion of an Autism Spectrum could also be seen as a Liminality Spectrum. The condition cannot easily be nailed down into a simple binary. Those of us at the end of the spectrum that is written off as mere eccentricity know only too well what it is to be deemed a lazy moral failure. This is a common experience amongst all neurominorities though the reasons of terms of disapproval may change. The result is the energy and stress costs of “Masking” whether it’s for Stuttering, Autism, Dys(x) etc.  in order to try to make ourselves timely for the needs of the machine.

Historically, with the authorisation of a Medical Label, we could ditch the anxiety of indeterminacy, of liminality, of being “neither here nor there”. So it came as a huge relief to be certified as Disabled and not Bludgers, Scroungers, or Leaners. Yet we know only too well the cost. To avoid being shamed and punished, we found ourselves locked into a category of clinical deficit. And too often we internalised the shame.

But all that is changing, thanks to the pioneering work of neurominorities who are slowly changing the old paradigm, and experiencing the enrichment that comes from meeting new “friends” with new narratives and perspectives, as we change the world together.

There were 700 people there at least, Stutterers, family, professionals, or all three. An atmosphere of energy and excitement. I met some wonderful people, Vivian Sisskin, Josh and Chris, Mark Baer, Patrick Campbell, Chaya Goldstein.

The session that stands out for me 2 years later, because it resonated with a similar session in England that month with Paul Stevenson, a UK Tourette’s activist, was with a person who stutters from the US. Unfortunately I don’t recall his name, because he was not the speaker in that session, but spoke up with his personal testimony in the question time. The issue was being stopped by police while driving, and then anxiety ramping up Stuttering and Tourette’s Tics respectively,  so that uneducated police assume the worst: guilt, or evasiveness, or defiance,  a dangerous situation. And being in the USA, with the person being black, as you can imagine, he feared for his life. This remains a huge issue for policing, disability awareness and racism. Too many neurodivergent people are being shot by nervous, untrained, and, sometimes, prejudiced police.

I was also impressed by the stance of the NAS Speech Therapists compared to that of the mainstream association. While the mainstream tended to focus on “fixing the stuttering”, the NAS therapists were about making choice available to their clients, rather than imposing their own assumptions. They see their roles as giving Stutterers information and links to stuttering community groups to help them make up their own minds whether they wanted to learn techniques to minimize stuttering, or learn to reduce the anxiety of being themselves, or some combination of both.

People are always talking over me in meetings. I have been known to get so frustrated that I burst into tears and walk out. To this day, I don’t understand why this keeps happening to me. Speculations: All three generations of women in my family, are slow in our movements, and physically feeble and low in energy. Is my body clock slower than average? Am I a microsecond too slow to respond? Is my sense of timing off? Do I speak too softly? Is it because I’m not popular, too plain, look ‘different’?  I am acutely aware of group conversation dynamics, and know the direction of the gaze is always towards the popular people. Even if I’m in a group of two in a restaurant, the waiters seem to address the other person… except if the other person is ‘coloured’ or visibly disabled. Yes, I’ve noticed that. And guess what, dominant women do it as often as dominant males. So for me, though I don’t stutter, the idea of Pace was a revelation!

Interestingly by the last day of the conference I found myself stuttering somewhat. Was it because the pressure valve to strive for fluency and a self-confident front was off, or because I’m an empath/chameleon who starts to mimic whichever group I’m in?

One thing is sure – the Human MindBody in all its complexity is a marvellous and fascinating thing! And we enrich each other when we share the stories of our journey to free ourselves from our culture’s limiting assumptions. 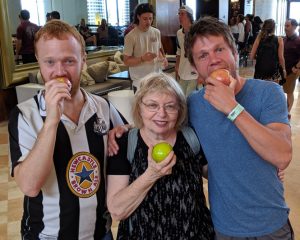