When I was growing up I was always given the impression that my stammer was a sign of weakness, something that should be cured or fade away. I turned to art to drown out these expectations and, in a way, give me a second voice people actually listened to. It wasn’t until I was an English Literature student studying comics that I realised just how interconnected these two voices could be. I was intrigued by how integral presentation is to the way a comic’s story is told, and started to wonder if I could do something similar. Many years later this led to Coursing Constellations (which I assure you is as much of a mouthful to say as it looks) being born.

CC (much easier to say) follows Kring, a quarter alien human who is determined to follow the stars until they find Earth, a planet thought to be long gone. Along the way they meet a girl, fall in love, and discover the secret to Earth’s location is only the tip of the iceberg when it comes to what the universe is hiding. While stammering isn’t the core of Kring’s personality, I wanted the story to be crafted in a way that would no longer function if they were fluent. Their disability impacts the way they see the universe and how they communicate within it, influencing how they react to certain plot threads. Later down the road there is an arc where Kring’s voice is the focal point, but for now they have way bigger fish to fry.

When I initially started writing, one of my main goals was for the reader to feel every word Kring says. While I want the audience to see them as a character who has more to them than their voice, it’s crucial to show how much it’s shaped them as a person. I’ve seen some say that they prefer it when people limit how much stammering is represented in a character’s speech patterns, but to me that defeats the point. While you can erase the way a character speaks, we don’t have the pleasure of ignoring it. I want impatient people to feel uncomfortable, forcing them to reassess why they feel that way. They’re made to see a fluent world from our perspective, and feel our frustration as we navigate through it. On the flip side of this, I also show the fun side of having a stammer. Kring is always open to making jokes about it. Stammering doesn’t automatically equate to being miserable, which few spaces give us the chance to show. Telling stories became my own personal stage to express that.

Kring’s voice influences the way the comic is structured too, complimenting the way it is written. I took my unique way of talking and applied that to the way I draw, using the same techniques writers have in the past to control the flow of their comics. I manipulate the page layout to reflect Kring’s stammer, and as a result time. I often add additional panels and speech bubbles to slow the pacing down to allow more time for them to speak, meaning scenes are longer or shorter depending on the stammer’s response to certain circumstances. Additionally, I overlap panels or speech bubbles to show sudden moments of fluency, like how natural stammering works. It’s unpredictable. Kring’s voice breaks into another panel, speeding time up.

There are also instances where I manipulate the sizes of panels to highlight anxiety or how time stands still when I struggle to talk. It’s a visual representation of how my chest feels when I stutter. If I try and force the words out I can’t breathe, as if I’m stuck inside a small box.

Other times I focus on Kring’s body language and facial expressions. I want to show the vast range of physical things we do to help get the words out. One thing Kring does often is visibly tap a part of their body, showing that they’re trying to speak with rhythm, again making time work in their favour.

The way I structure a page isn’t always dependent on the stammer itself, it’s influenced by those around them. There’s a lot of focus given to people’s initial reactions to Kring’s voice, which shapes how they view them for the rest of the story. This very much reflects our reality of having to swiftly work out who will respect the way we talk and who won’t. One kind gesture and, who knows, you might have just found the person you’re going to spend the rest of your life with.

Interruptions aren’t shown very often as people tend to be respectful towards Kring, but when they are I plan to use speech bubbles covering up Kring’s and panels overlapping their own. This is visual representation of how speaking over us silences us.

Furthermore, Kring’s internal monologue is shown through purple boxes, indicating their place as narrator of the story. When I speak I have a lot of thought processes going on in my head, so I wanted to show Kring talking to themself in a similar way. These boxes are fluent, like I am in my head, and are used more frequently around new people or during tense scenes, reflecting their anxiety.

In a way, Kring’s journey to accepting their voice is a reflection of my own: Our voices have more power than we think, it’s just a case of learning how to use them. 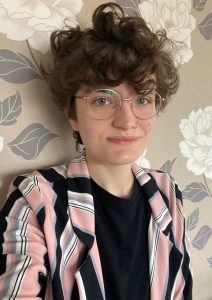