What happens when we view speech and language therapy for children who stutter as a celebration of difference rather than a process of chasing fluency?

Is it possible to throw a party announcing we stutter, loud and proud?

About three years ago I sat in a room with six 10 and 11 year old boys who had attended therapy before for stuttering. This initial session was a goal setting one, what did we want to do for the next few months? I need to hang my colours to the mast here and say that the previous goal of therapy was not fluency and no fluency shaping technique had darkened our doors.

Instead we had gathered information, researched and educated ourselves and our families about not just stuttering but their stuttering. Some had gone into schools and given presentations for class mates and teachers. We had held a tea party for parents where their knowledge of their child’s stuttering was rigorously put to the test by their own children while eating cake. They had written letters to the Stuttering Foundation of America and were proud of their publication.

Recalling this, the boys talked about how the group was one of the few places where they met other people who stutter. They had friends from school and knew others through extracurricular activities but this group was different and very comfortable.  One talked about how, until he had joined the group, he had never met, heard of or talked to another person who stuttered. He was ‘mad’ about this. This feeling of invisibility and marginalisation is nothing new for many young people who stutter (Erickson & Block, 2013) and has been addressed used Narrative practice (Leahy, O’Dwyer & Ryan, 2012).

So how do we provide an opportunity for children to resist these normalizing judgements? We need to look for opportunities to show the child a new picture of themselves and put them in situations where they can see themselves differently (Caughter & Crofts, 2018) and be seen.

‘It is no longer enough to give people a relationship in which they are free from being judged. What they need is an opportunity to actively deconstruct the normalising judgements operating on them and to push back against the effects of these judgements’ (Winslow, 2013, p8).

We need to celebrate ‘the natural variation, the unique skills, experiences and traits of neuro-divergent children’ (Constantino, 2018). The group’s solution was to have a party to celebrate stuttering. Every good party needs an organising committee; a designer, a secretary, a games organiser and music coordinator. The designer wanted his poster displayed in the waiting area for all to see and in case there were any doubts about the theme of the party he threw in a few repetitions for good measure. 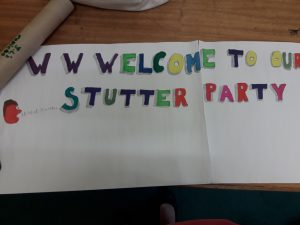 The secretary wanted the ‘Stutter Party’ invites in bright colours to stand out.

The games organiser wanted a way to represent the people who were there so I provided paper people and paints.

As a speech and language therapist my input appeared minimal. The music coordinator provided me with a play list, and the group gave me a list of things to bake. Throughout the party process I began to reflect on change and who actually needs to do the changing. I became very aware of my own thoughts, feelings and expectations around my role as a speech and language therapist.

There can be cons to these acts of resistance for both client and therapist.  Exposure being one of them; a sense of being isolated from ones professional community, of not belonging. For the boys, perhaps a lack of acceptance by peers and their own families. For the therapist, exposing beliefs not in keeping with an overarching medical model.

Then I remind myself that it might simply be the process of finding a new tribe.

(After weeks of discussion, meticulous planning, creating and posting of invites, a party was held.

10 boys and girls attended the first party, 15 the following year. Last year’s was cancelled due to the COVID pandemic. But 2022 aims to be our biggest one yet!) 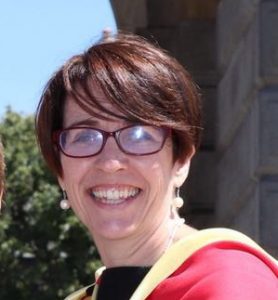