What does speech feel like when it feels good? When it feels bad? What does it feel like when we’re struggling? When we’re not struggling? Can we stutter without struggling? Can we be fluent while struggling? I asked these questions to groups of people who stutter. Their responses coalesced around a similar theme: when speech feels good we aren’t doing anything to control it. In other words, we’re just talking without having to think about it. We aren’t explicitly aware of how we’re talking or if we might stutter. Our focus is on the conversational interaction rather than the mechanics of speaking.

I’ve come to call this quality of speaking spontaneity. It has three characteristics: 1) little premeditation, 2) effortless production, and 3) is enjoyable and meaningful. Spontaneity is not fluency. In fact, much of what stutterers do to achieve fluency limits spontaneity. Hiding our stuttering or passing as fluent requires quite a bit of premeditation. Speaking with fluency shaping techniques focuses effort and attention on speech production. Although passing as fluent and using fluency shaping may produce speech that sounds fluent, this speech is clearly different from typically fluent speech. Spontaneity captures this difference. The speech of a typically fluent speaker is spontaneously fluent, they aren’t thinking about speech production or expending effort to produce fluency. The speech of someone passing or using fluency shaping techniques can be thought of as effortfully fluent, this is fluency achieved at the expense of spontaneity.

In the same way that fluency can be both effortful and spontaneous so can disfluency. Stutters that divert our attention and require effort to move through clearly limit our spontaneity. We can call this effortful disfluency. However, not all stutters are like this. As the stutterers mentioned earlier discussed, sometimes we stutter without having to attend to it. We stutter without anticipation or effort. We call this spontaneous disfluency. 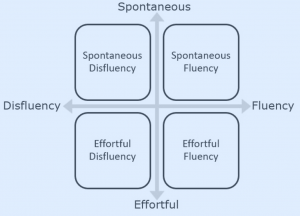 I was curious if I could measure spontaneity. I developed a set of questions designed to capture the feeling of speaking with little attention, little effort, and enjoyably. I asked people who stutter to fill out surveys through their smartphones reporting on five speaking experiences every day for one week. The participants reported their spontaneity in each conversation, their fluency in each conversation, and the situational context in which the conversation occurred. They also completed some stuttering assessments before participating.

The results of this study showed that higher spontaneity predicted lower adverse life impact of stuttering. However, fluency was unrelated to adverse life impact of stuttering. To say this another way, increased spontaneity is associated with increased quality of life regardless of fluency. Whereas fluency, by itself, did not increase quality of life. This is a speculation, but likely this is because sometimes fluency was increased at the expense of spontaneity, i.e. through fluency shaping and covert stuttering.

These findings have implications for how we think about our stuttering. They suggest that movement over the X-axis in the figure (from effortful to spontaneous speech) represents a more meaningful change for people who stutter than movement over the Y-axis (from disfluent to fluent speech). It’s not the presence or absence of disfluencies that makes stuttering difficult but rather the extent to which speech is physically effortful and attention demanding. Fluency is not bad in itself but fluency achieved at the expense of spontaneity is not likely to improve the experience of speaking much. Rather it seems much more helpful to learn to speak as easily and openly as we can.

How might we do this? Traditional speech therapy approaches that reduce apprehension and avoidance and increase productive, forward moving reactions to stuttering are helpful. However, therapy certainly isn’t necessary for everyone who stutters. There’s plenty we can do on our own. The more comfortable we are stuttering the less likely we are to closely monitor our speech and get in our own way. Getting comfortable stuttering is easier said than done. It is easier to let speaking happen without thinking about it if our stutters are less threatening. We can reduce the threat of stuttering by finding reasons to stutter. What does stuttering do for us? What do we gain from it? I can’t answer this question for you but I can give you a personal example. I find stuttering to be a deeply vulnerable experience. Every time someone witnesses my stutter, they witness me temporally out of control of my articulators. This vulnerability adds intimacy to interactions that wouldn’t otherwise be there. I’ve had deeply intimate conversations with strangers after they witnessed me stuttering because my stutter made them comfortable enough to let their guard down. My stutter builds connections and forges relationships.

I hope that emphasizing spontaneity over fluency opens up new ways for people to understand their stuttering. It takes seriously the real difficulties people who stutter have speaking without appealing to fluency or normalization. It makes the therapy process easier to understand for both therapists and people who stutter. It also frees people who stutter from fluent norms that they can only meet with great effort. Furthermore, the results of my research suggests that reaching these norms with great effort is detrimental! Instead, let’s stutter openly and joyfully. 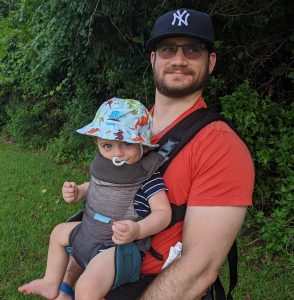